and of course we were there to document it for you. 🙂

Following on from the intimidating police numbers demonstrated at yesterday’s #BTB #Showandtell action, the boys were out in force and so were the cameras.

MSM huddled under the storefronts behind police lines and the most active videographers were the police cameramen with their top of the line equipment.

In contrast, we used: 1 cellphone, to provide the below footage (a crappy hand-me-down at that lol). Unfortunately we had no livestream today as Redstar’s gorgeous son was present however I’m sure tons of vids will be on You Tube in short order. (Search Auckland Action Against Poverty or National Party Conference Protest)

We arrived at Federal Street to find a curious sight. Barricades, of the heavy plastic variety, anchored by sandbags. As you can tell from the pavement it was absolutely pissing down for the most part, the sidewalks slippery but it was fortunately not too windy or too cold.

The above terribly blurry photo that would usually hit the trash can immediately is of what appears to be the same police camera chick as yesterday except that today she was filming US…. the citizen journalists…. not just the protesters like yesterday. Perhaps her appearance in our last blog post made her want to reciprocate. Sorry police camera chick its nothing personal. But anyone who runs around with a camera should accept that they’re going to get filmed, as we do and are, regardless of whether they are in a uniform or if they are just random students and stay at home mums and self-employed people and other members of the public; like we are.

The student-provided Legal Observers from yesterday were back, which is a massive relief to those of us who know how important it is to have impartial legalese-savvy eye-witnesses on the ground at events like this. Kia ora to you guys thank you so much. But they weren’t the only ones who were back…

But we were also back. And we made a far more impressive sight. Check this out 🙂 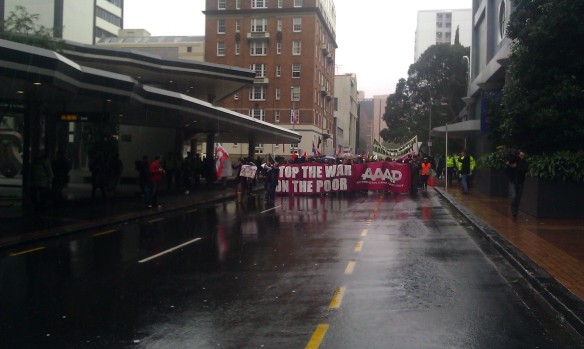 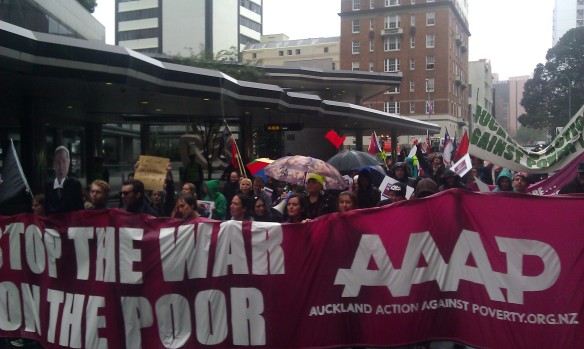 As the march approached and passed us we were all cheering, catcalling and whistling. Excellent atmosphere welcoming staunch democratic protesters who came out in solidarity despite the miserable weather and intimidating show of police numbers.

We think this may be the first march we’ve seen where the numbers of police present dwarfed the number of protesters present. Not for lack of protesters either! Amazing to think that at last weekend’s Aotearoa Is Not For Sale march they managed to “control” 3000+ protesters with 12 police… yet required into the hundreds of police for a couple of hundred protesters? Apparently the difference is the presence of the Prime Minister. If you’re wondering why you had lack of attention to a household burglary this weekend, I wouldn’t be the first to point out that the blame probably lies at the overly-paranoid battalions of police that appear whenever a protest gets near a National Party event.

These guys were also back. The Sky Paths above the street are a favourite with the inside men behind the National Party Conference at Sky City, and their lackeys.

As you can see John Key was symbolically present at the protest, while simultaneously speaking inside the Convention Centre, no doubt making smarmy jokes about the people with legitimate grievances protesting outside, in his usual form. Time for some happy photos; of the gorgeous protesters and their signs. 🙂 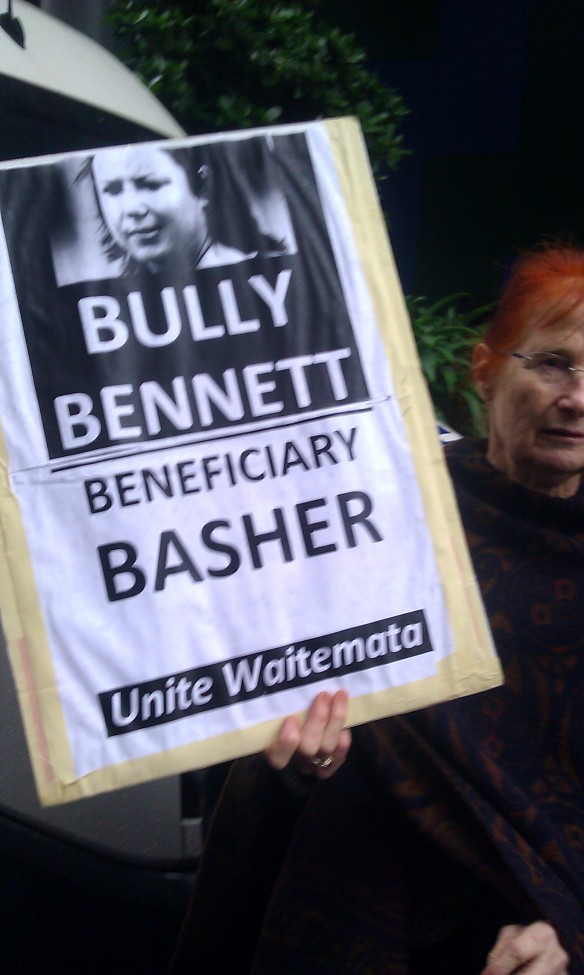 Now for the priceless show piece. A cafe on Federal Street tried to take the piss out of protesters. Now it seems their sign got occupied!!

We have a few more great pics that we’ll add later but this is all we can do for now. Hope you guys enjoyed the coverage and congratulations to Auckland Action Against Poverty for hosting such an awesome event. There was one tense moment that we haven’t described here yet; where protesters stood on the barricades with banners and between the four paddy wagons present and the over-the-top police presence we really thought that it might end in mass illegal arrests (and undoubtedly many people later released without charges) however a genuine congratulations is in order to the NZ Police for above all remembering that there were children present and allowing the event to come to a close naturally, with no arrests. Thank you for that. Also for listening to the korero about police privatisation occurring internationally. You may not realise it yet but despite everything, when austerity comes to cut you guys, we will be marching for you as well. We are activists for ALL New Zealanders & in solidarity with the international Occupy movement – regardless of who your employer is. Kia ora.