In a mere handful of hours, Kiwi protesters will confront riot police and the full resources of the state, to show their indignation over the signing of the Trans-Pacific Partnership Agreement.

It has been a long fight against the TPPA – a struggle which started with just a handful of academics and trade union reps, and has escalated to involve tens of thousands of mainstream New Zealanders, captivating the attention of national and international media.

High-profile campaigners Lori Wallach (USA) and Dr. Jane Kelsey (NZ) have been working to educate the global public since at least 2010 if not earlier.

In 2011 there were some Trade teach-ins at Occupy in New Zealand about the TPPA and at Occupy Wall Street in NYC (by @OWSTradeJustice), yet the issue still remained largely unknown to the public.

This changed in 2012, as the actions grew more sizeable and more visible. Police intimidation and violence against protesters at the December 8 #TPPAshutdown event, perpetrated in the presence of international and local independent journalists who caught it all on film, understandably dismayed movement organisers but ultimately helped raise the profile of the issues and gained worldwide attention for the movement.

Below is a partial (and by no means an exhaustive) list of anti-TPPA actions in New Zealand with some passing references to overseas actions. For full details of all It’s Our Future NZ events to date, you will need to search the Official Facebook Page for the movement. The below references are mostly sourced from blogs and Twitter.

This blog publishes a statement by the Electronic Frontier Foundation to demand a Congressional Hearing into the TPPA.

February 17, 2012: “Secret Free Trade Agreement That Should Have All Of Us Very Worried”

This blog publishes a post with links to key information sites about the TPP and a warning about the dangers of the agreement.

We attempted a fundraising campaign to bring three well-known activism international live-streamers to New Zealand to cover the TPPA shutdown events. One day into our campaign, malicious actors have our domain knocked off-line for the duration of the campaign. Despite this, anonymous donors fund the trip for Nate “Occupy Eye”, who then produces incredible footage capturing the shutdown actions. The footage is used by international media including Sky TV and the fall-out reverberates around the world.

After refusing to allow Dr. Jane Kelsey and other representatives to deliver a petition signed by hundreds of thousands of people, private security and police begin to attack the crowds of protesters and things turn ugly. The petition boxes are set alight, and the footage of the fire captures worldwide attention. Protesters regroup at Aotea Square, where they are almost kettled by four groups of police at each corner of the square.

After a group of police single out a young female protester and pile on top of her (she briefly passes out in the press), the crowd retaliate by beginning to advance en masse on the police lines. The police are ordered to withdraw and leave the square, while thousands of people scream “SHAME! SHAME! SHAME!”

This epic blog-post aggregates a ton of pictures, videos and first-person eye-witness narratives from the day.

Blog-post including pictures, videos, timestamped analysis of footage, and details on the leaked tape: https://occupysavvy.wordpress.com/2012/12/12/leak-nz-cops-brag-to-u-s-embassy-about-bashing-tpp-protesters/

2013: Twitter comes alive: untold thousands of tweets circulate information about the dangers of the TPPA

November 13, 2013: Wikileaks publishes a leaked chapter of the secret agreement

Wikieaks publishes a leaked draft of the Intellectual Property Chapter of the TPPA; the EFF says it “Confirms the Worst Fears‘.

2013: International opposition to the Trans-Pacific Partnership Ramps Up

As per EFF’s ‘Year in Review’ of the TPPA: 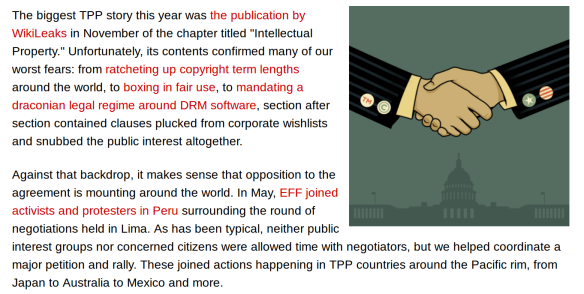 Occupy Auckland media team members who had been admins on the official @ItsOurFutureNZ twitter accounts put their heads together in a phone call and come up with a new hashtag to be used for TPPA actions.

The hashtag that had originally been planned was #RallyAgainstTheTPPA – which, at 19 characters in length, would be extremely cumbersome for the live-tweeters and crowd to use on the day. “It needs to be short and catchy. It needs to rhyme. What rhymes with TPPA?”, @endarken said. “TPPA – No Way!” said @keyweekat. After running it past the other event organisers, the official event images and details were all amended to reflect the new hashtag – which went on to become one of the most (if not the most) most widely circulated and successful hashtags in New Zealand history – #TPPANoWay!

Occupy New Zealand posted the first official tweet to the hashtag, soon followed by the official movement account for It’s Our Future NZ. 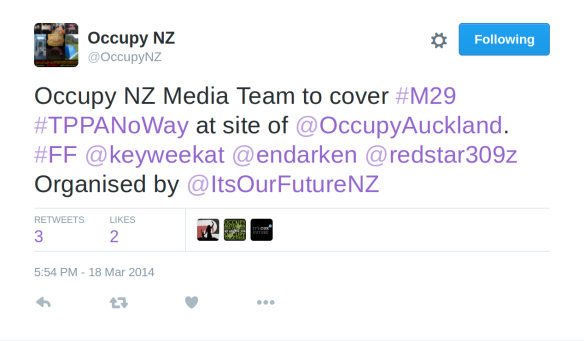 16 New Zealand cities and towns marched on March 29, and a number of international cities also marched in solidarity. A huge blog-post was published on this blog, containing countless pics, videos and commentary from each of the cities who marched, along with solidarity statements and other information.

Thousands of tweets were posted to the hashtags by event media, attendees and supporters – the hashtag is picked up by the mainstream and trends throughout the day.

Another National Day of Action sees more than a dozen New Zealand cities protest against the TPPA and “Kiwis As Far As The Eye Can See Say #TPPANoWay!”

A whole stack of TPPANoWay protest videos are available on our You Tube channel – click here to view them. 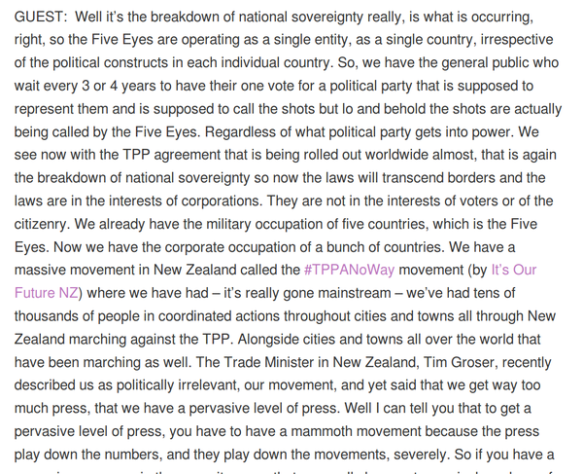 After a week of mass actions across the country, where over 25,000 citizens protested and more than 100,000 signed a petition against the secret trade deal, the Prime Minister of New Zealand makes the profound mistake of calling the protesters ‘misinformed’.

In response, over 12,000 people call for the Prime Minister and his Trade Minister to debate protest leaders live on television. They do not take up the offer.

It’s Our Future NZ pubish this cutting article on their official website, full of incredible facts and links, mocking the Prime Minister’s claims into oblivion.

August 18, 2015: Wikileaks publish a definitive video, explaining how the TPPA, TISA and TTIP regional agreements are all the same USA global agenda being played out

In an act of civil disobedience, protesters attempt to gain access to the secret text of the TPPA at the Ministry of Foreign Affairs and Trade in Wellington. Police arrest 15 of them. 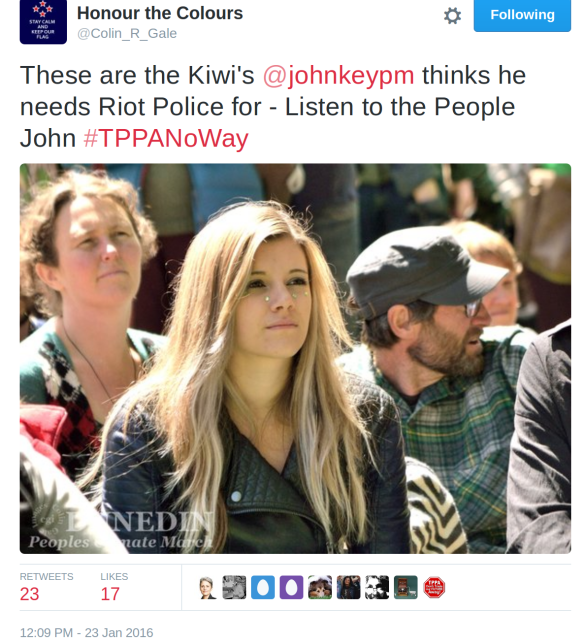 Telesur reports that the New Zealand government has deemed the anti-TPPA protesters ‘a threat to national security‘:

February 4, 2016: The Trans-Pacific Partnership Agreement to be signed at… a casino.

Nationwide protest events are organised including a (non-official) blockade at the casino, followed by an official mass action against the signing.

The first protest at the TPPA signing is scheduled for 9am, NZDT 5 hours from the time this article will be published. The official mass action will occur at 12pm midday, NZDT, February 4th, 2016.

There has been reported intimidation of known protesters by police, at the homes of the protesters, and there is now reports that major public transit services will not be running. This is not an unknown tactic – prior mass protest actions have seen halts to train, bus and ferry services, always with some official excuse as to why, but always conveniently timed for just before and during the protest actions.

Kiwi political blogsite “The Daily Blog” has asked the NZ Police – ‘which side are you on?‘ and warned them that ‘The whole world is watching‘, which is very true.

How you can help:

First and foremost: search social media platforms and the web for content relating to ‘TPP’, ‘TPPA’, and ‘#TPPANoWay’, and circulate the information you find to everyone that you can.

If you are in New Zealand, get down to a protest near you. All event details are on the It’s Our Future website and Facebook page.

Other than that – please watch, share, raise your voices and let your opposition be known. There are countess New Zealanders putting their bodies on the line for democracy today, and they truly deserve all the support you can give them.

A Special Thank You

Words can’t describe what the efforts of Dr. Jane Kelsey have meant for this movement. Her potent expert analyses for Wikileaks (if you web search “Wikileaks Jane Kelsey analysis” you will find many worthwhile examples of these); her uncountable television appearances; live appearances; public meetings; speeches; networking with international activists and groups; travel; are all worthy of their entire own article and maybe one day she will be able to look back and tell her story of how this movement began, and how she watched it blossom into the massive tidal wave of righteous dissent that it has become.

Likewise, this article does not even begin to acknowledge the thousands of march organisers, marshals, banner and sign-makers, union groups and organisations, other independent media organisations, attendees, protesters, donors and everyday New Zealanders who have donated their time, energy and resources into building this movement. By telling this story from our perspective we are in no way intending to deprive them of the full credit they deserve. Without the efforts of all those involved, there would have been no movement for us to help promote.

It has been a privilege to support, and the global response has been humbling and in a really good way, overwhelming. We are deeply grateful to all involved.

Thank you for reading, and solidarity from New Zealand.