They say the wheels of justice turn slowly but indeed they are turning.

At long last, some measure of vindication for the countless legitimate protesters victimised by Auckland Council.

At the close of business today March 6th 2013 the corporate media began reporting that the High Court in Auckland has finally found in favour of Occupy Auckland.

The extremely sparse media reports (no more than a few short paragraphs and almost uniform wording across a slew of mainstream news sources) don’t tell you much other than that the violent evictions imposed by the Council despite our pending court appeal “went too far“.

Indeed, lawyer Ron Mansfield suspected as much, when he warned us that the conduct of the Council surrounding the evictions may have breached the terms of their own by-laws. That stealing and storing our belongings in a supposedly “vacant” hangar at the same airforce base the FBI were flying in and out of that very week; miles out of town; may be onerous.

That their demanding private information about anyone who did manage to get out to the airbase to “claim” their belongings; may not be legal.

The human cost of the evictions is impossible to calculate and goes far beyond the dozens of arrests on January 23rd & 26th, 2012.

The occupations created organising hubs for the public to engage in political activism that should be encouraged in any healthy democracy and indeed is enshrined in our Bill of Rights.

From the homeless protester in his 80s who suffered multiple heart attacks and was hospitalised after his heart medication was unlawfully seized by “security”, and the Occupy liaisons who frantically tried to negotiate with the Council for the return of the medication, only to wait 48 hours for a response…

…to the middle-aged grandmother who had never been arrested in her entire life until Occupy, never had a tent or stayed overnight at an occupation, but was named in litigation by Auckland Council and hauled relentlessly through Court, unjustly…

…to the intelligent and sincere young man, of whom images were plastered all over the national media after he was lifted off the ground by his neck by police alongside mercenary corporate private security companies hired by Auckland Council at ratepayers’ expense…

…to his petite girlfriend, trapped outside the temporary fencing Auckland Council erects on a whim at a cost of tens of thousands of dollars, screaming with raw fright and fear as she witnessed what was happening to her partner before her very eyes…

…to a little 5 year old boy, who the police and Auckland Council staff alike, left in the middle of Aotea Square; after they arrested his father in front of him, without even noticing the child…

…to the woman who scooped up the child onto her hip, marched into the congregation of police officers outside the paddy-wagon-filled Auckland Council carpark and publicly scolded the Inspector in charge for the display of utter negligence…

…to the uni student, who was one of the first to feel the cold touch of publicly-funded Council-ordered surveillance, so early on in Occupy that he was not believed; surveillance that, although later confirmed by the Council to have been undertaken, escalated until his entire life fell apart around him. Despite being so young, he was forcefully institutionalised and temporarily drugged into apathy… all on our tax dollars… his persecution paid for by our rates…

…those who suffered profound loss because of Auckland Council are too many to be counted on all our fingers and toes. Thousands of people per week became active in their communities at grassroots level because of Occupy and collectively housed, fed, educated and cared for hundreds residing in the occupations.

…to those who were slandered, libelled, suppressed, oppressed, victimised by many of the mechanisms of the state, most visibly, Auckland Council.

The very body that is supposed to represent our interests.

Whether there can ever now be reparation remains to be seen. So much was lost that cannot be returned. Many occupiers may now not even be alive. Many have had such financial pressure and mental stress applied to them that they have lost or are losing what assets and opportunities they had.

Many have been served with questionably legal trespass notices; intimidated out of returning to the CBD or outright threatened in various forms.

Last October 15th, 2012, the 1 year anniversary of Occupy Auckland, protesters performed flash occupations at the original sites and at other places of significance to our movement.

But of course, Auckland Council got a visit. 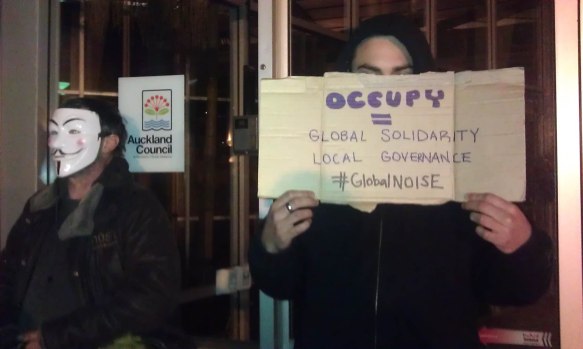 As did TVNZ, the national broadcaster who had participated in the corporate media blackout, and then smear campaign against Occupy.

TVNZ, who utterly failed to fairly represent the voices of the people, or to sufficiently educate the public as to the global and viral nature of the movement, found their staff entrance temporarily occupied.

But also on the flash occupation list was the High Court in Auckland.

Yet this recent ruling begins a process of restoring the faith instilled in us by the human rights lawyers at Occupy Auckland, so long ago.

We DO have the right to the basic necessities of human life even though Auckland Council denied us water, power and the tools of communication.

For we do and should have the right to peacefully assemble. The right to free association.

The right to dissent and the right to seek redress from our systems of Government.

We have the legal right not to be discriminated against on the basis of our political opinion.

We have the right to participate in our democracy. All of us.

And we must. For the viability of the continued existence of our entire planet, depends upon what we do now.

E tu Aotearoa. Stand up and fight back. Don’t let them sell what scraps they have not already stolen. This is our country. It is priceless.